Just so you know, the wife and I have been starting the Doctor Who saga over. And I mean over. As in William Hartnell over. Most Americans were introduced to Dr. Who during the Tom Baker years, but once it gained popularity here, they threw a few of the Hartnell/Troughten episodes on the air and that was pretty much it. Since I’m a completest kind of person, I’ve been putting the cursed Blockbuster account to good use and playing catchup on some stuff I’ve been wanting to see. So with that said, I’ll probably be caught up with the current series sometime around 2015. (That is, provided Blockbuster starts filling in the missing DVDs they don’t have. It’s bad enough most of the Hartnell stuff is missing, much less having to skip through what little does exist.)

Here’s the thing. I was looking at an article about the new guy. And I guess it was an American website, because the nimrods in the comment section of this site kept making jokes about how they were going to crossover Doctor Who with Twilight and 90210 and some such nonsense.

As I said, here’s the thing.

They were insinuating that the show was coping to the teen/Twilight crowd because they picked this real handsome young guy. 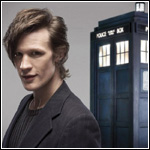 Young, surely. Bloodless, maybe. But handsome? Twilight handsome? Is there something about the “leave a comment” button that just turns on every dim bulb in the world and forces them to say something, even when it doesn’t make any sense?